I mentioned on Friday that Nathan and I were going out to Birroteca for dinner to celebrate 10 years together. We had heard so many fantastic things about this restaurant and decided this was the perfect time to cross it off of our bucket list [more on that later!] and I’m so glad we did. Every dish was absolutely wonderful! I think we might be experts on the menu now because we went all out!

We got to the restaurant a little early so we took advantage of their happy hour drink specials. Wine for me, beer for him. The cocktail list looked awesome but we were waiting until we were seated for that. 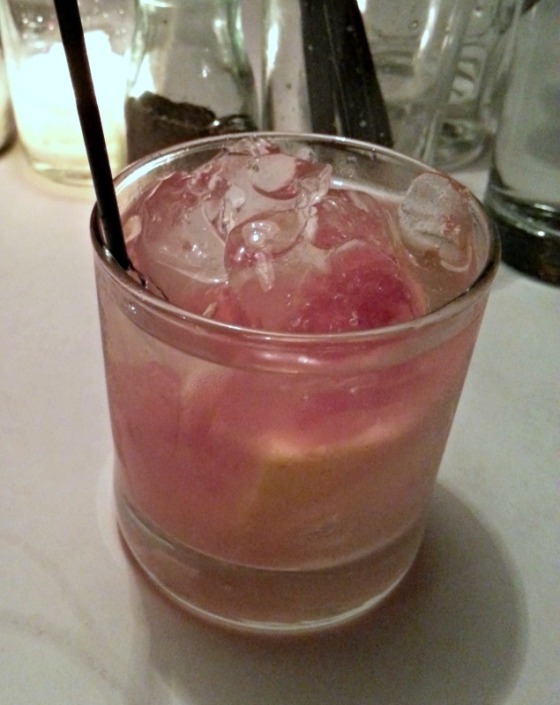 We couldn’t decide on one appetizer to split, so we had to get our own. They all sounded so good! 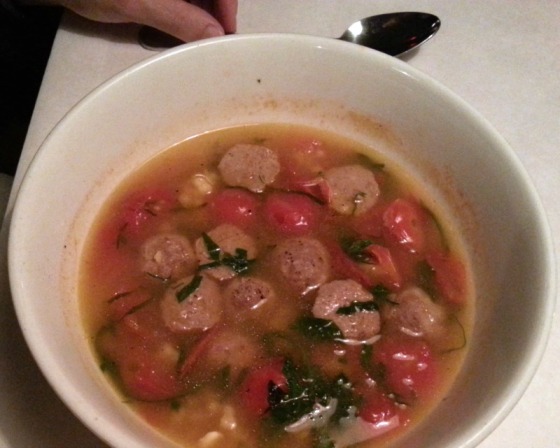 I know, it doesn’t sound so exciting, but those tiny meatballs were packed with flavor! The broth had a little bit of a kick, the tomatoes were so fresh, and the barley had the perfect bite. I’d never had Italian wedding soup before, but this would have me coming back again!

Again, it may not sound like the most exciting appetizer, but the flavors blended so well. And that vinaigrette was something special. I’m definitely going to be trying to recreate it at home!

No more his and hers. From this point on, we shared everything!

Whenever I heard anything about Birroteca, the crispy brussels were always mentioned. And how could I say no to brussels sprouts?! The aioli was so flavorful, you only needed a little on each bite and we were pleasantly surprised to find slices of salami throughout!

We hadn’t planned on getting the eggplant fries, but when we saw an order come out we knew we had to try them! Again, the aioli was packed with flavor and we were using it for everything! The eggplant was breaded and the crust stayed nice and crispy, even when we reheated them!

If we’ve learned anything in the past few months, it’s that we must order homemade pasta whenever we see it on the menu. And with a wild boar bolognese? Like there was any doubt!

The dish was a bit saucier than I had expected from other meat sauces we’ve had in the past. The sauce was also thinner than I expected too, but we loved it nonetheless. The chunks of wild boar were tender and the homemade pasta was cooked perfectly.

Oooooh the pizza! The crust was soft but not too chewy. The fig-onion jam mixed with the balsamic gave the pizza a little barbeque flavor. The duck confit was meaty and rich, but didn’t overpower the rest of the flavors. The fontina and asiago mix was flavorful so the pizza didn’t need a lot of cheese. And what’s better than topping all of that with a nice, dippy egg?! It just made it feel extra special. 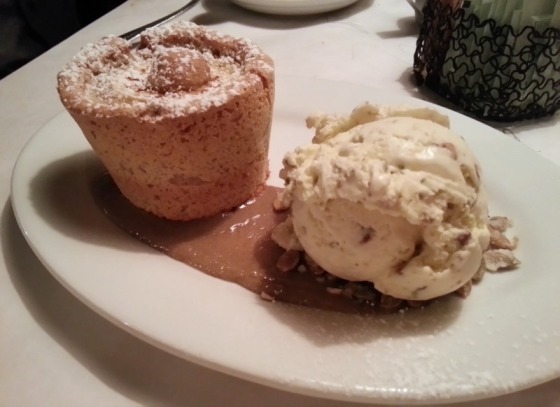 I told Nathan that I was “comfortably full” before dessert came out knowing that would probably change! He said to me “it’s gluten-free so it’s good for you, right?” Luckily I knew he was joking. I took one bite, looked at him and said “yea. Tell me that’s healthy!”

It was so amazingly worth every single bite! The cake, topped with an apple ring, was so buttery and rich. The simple flavors were set off by the nuttiness of the pistachio ice cream and creamy pistachio butter.

Knowing that we were going all out, we planned ahead and got food boxed up as the next dishes were brought to the table. I’m sure people were laughing at our tower of boxes! 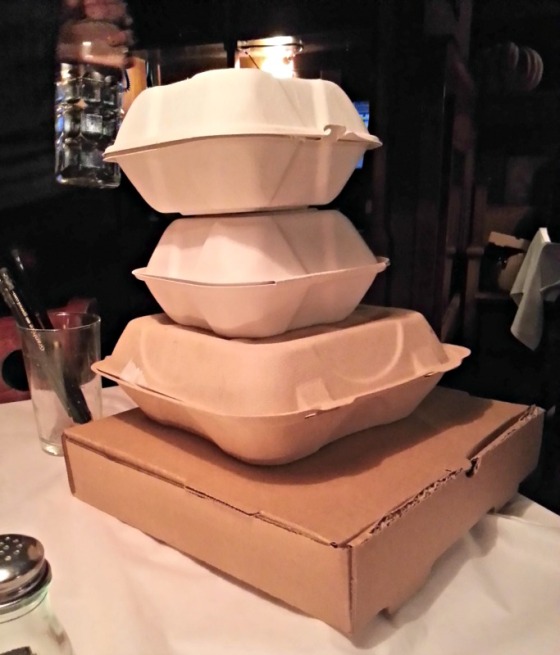 I can’t imagine a better way to celebrate 10 years with Nathan. We gushed over all of the food the whole night, even after we left the restaurant. It was so fun experiencing something new with him again and it was almost like taking another little trip back to Italy. Any reminder of the honeymoon is a good time in our book!

If you had to choose one dish from our menu, which would you choose?

Do you ever go out to dinner with big plans of trying wayyy more than you know you can eat, knowing you’ll take home leftovers?