Yesterday was a good day. Honestly, if there is an idea of what California living should be, this was it. I had an appointment scheduled to get some work done on my car. Usually that means sitting around waiting, but no problem, I’ll head down to the lake for a run! Ironic that I decide to go for a run after Monday’s post, but it sounded better than sitting around and the weather has been gorgeous! As much as I love routine, it was so nice to get a workout in outside of the gym.

I had a quick bite to eat before heading out since I knew it would be a little while until I could start my run and then have breakfast. Ezekiel english muffins are my new favorite with some homemade coconut cashew butter 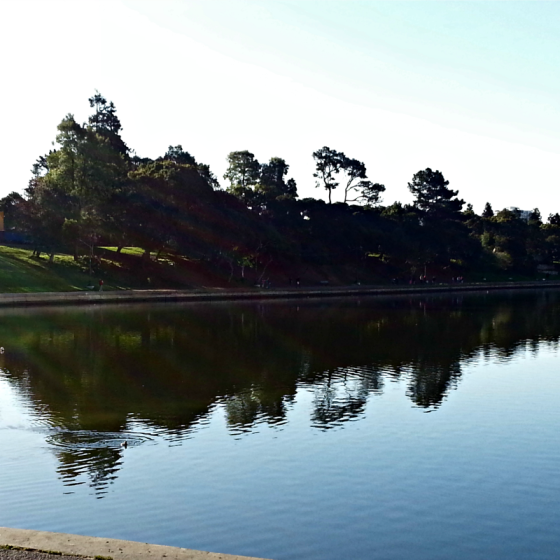 A friend posted on Facebook asking if she was the only person that doesn’t stop to take a picture when she runs and wanted to know if that means she didn’t actually run because there’s no proof. Ha! I had to take a picture for her yesterday.

As I finished up my run, I ran into one of Oakland’s finest, Ms. Carla Birnberg. It was a nice surprise and always a treat to have a few minutes to catch up with her. By this time I was practically ravenous and had my heart set on the hot bar at Whole Foods. I knew they had a breakfast sweet potato dish, but by the time I got there, it was gone. So I just loaded up on everything else, per usual. 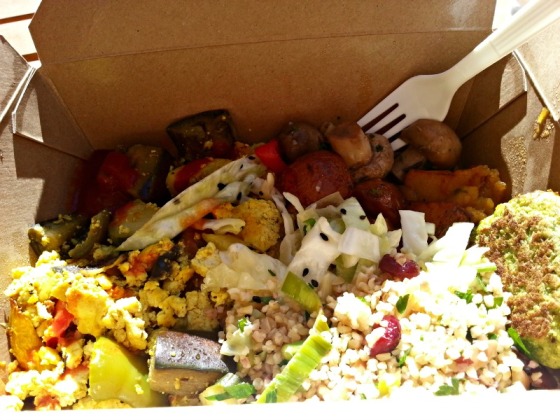 Scrambled eggs > scrambled tofu. Lesson learned. My wonderfully relaxing morning continued into the afternoon as I met Nathan for a walk around the lake. I’d taken my car to a place right near his office so by the time it was ready, he was ready for a break from work. It was such a nice treat to enjoy a Tuesday afternoon with him.

After our walk, I ran home for shower, lunch, and laundry. I knew that was all the time I’d have before I had to go turn around and pick him up from work, but it was so great to be outside all morning. I swear, I hardly sat down until 2pm! 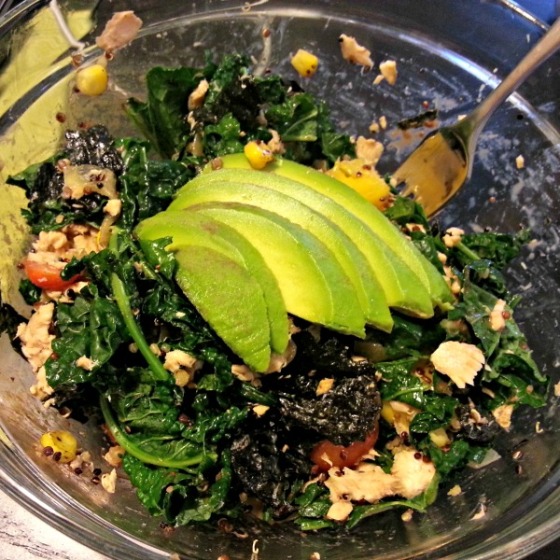 Wilted kale is the new black.

I’m loving wilted kale right now with basically the contents of my fridge. I’ve also rediscovered my love for nori. It’s so good on my salads and I can’t stop eating it right out of the package too. The salty crunch really hits the spot.. I may have gone through a couple packages in the past couple days haha.

I had a super colorful dinner planned and while I knew there was a going to be quite a bit of prep work going into it, it was absolutely worth it! 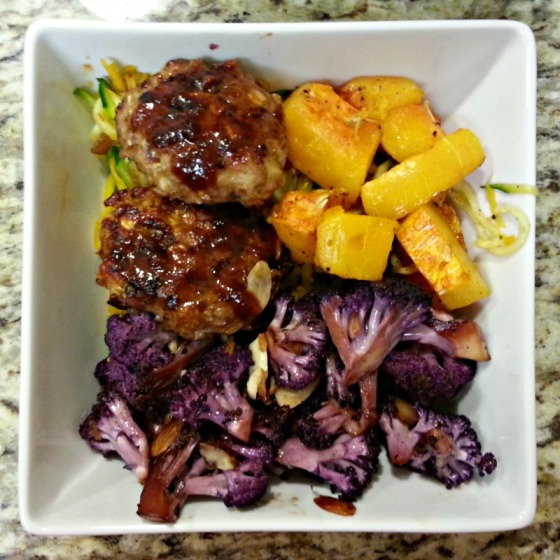 I’ve made these baked turkey meatballs before and they’re great to have in the freezer. We love leftovers in this house! I was also excited to try purple cauliflower.. I assumed it wouldn’t taste any different, but it was just fun to have. I also had a butternut squash staring me in the face for the past week so I decided to make some zucchini and squash noodles. It was SO good! Not to mention, Nathan isn’t a huge fan of any of those veggies and he cleared his plate. Mission accomplished!

It wasn’t my most productive day, but such a relaxing day and I absolutely loved spending so much time in the sunshine. It really can do wonders for your mood! Hey there, unusually extra positive attitude 😉 I’ll take it. And more days just like this one.

Does weather change your attitude?

Getting my foodie penpal package in the mail is definitely one of my favorite fun things to receive each month. And once again, I was completely spoiled!

Lauren at Lawfully Wedded Wife sent me a package this month. I told her that I’m a member of Tone It Up and being a member herself, she absolutely rocked it! From the healthy ingredients to make my lean, clean, and green meals, to the yummy little bites, I couldn’t have asked for more. (Nathan jumped in on the food action this month, too!)

So far, my favorite item has to be the banana chips. I’ve never had unsweetened banana chips before, in fact, I never realized that others were sweetened! These chips have gone into my oatmeal, protein cookies, and also dipped into a little peanut butter for a snack 😉

I also love the May’s Unique Vinaigrette! I have salads all the time for lunch, so this is a nice, new way to dress them up.

The peach preserves have also been thoroughly enjoyed! Homemade peach frozen yogurt quickly appeared.. and then disappeared even faster! Recipe coming soon, so check back!

I haven’t been doing much baking lately, but I’m super excited to use the chick pea flour to make a pizza crust! Nathan is a huge pizza eater, so I’m always looking for fun new ways to make it healthier and I’ve seen chick pea dough recipes all over the internet. Soon enough I’ll be eating my healthy pizza 🙂

Like I said, I was completely spoiled. And I love that so many of these ingredients came from Lauren’s local farmers’ market! It definitely made me want to take a closer look at my market next time I go. But in the meantime, I can’t wait to enjoy the rest of my goodies! 🙂

Do you participate in foodie penpals? If so, what has been your favorite item that you’ve received? If you don’t participate, what are you waiting for?!

Learn more about joining the Foodie Penpals program from The Lean Green Bean!