Sunday I had a really serious conversation with my nutritionist, Cyrus. As you may recall, he has me experimenting with a high-carb [70% carb, 15% fat, 15% protein], vegan diet for 14 days. At the start of week 2, I met with him and told him my main concern—I’m not eating the right foods for lunch to hold me over; especially when I’m out of the house all day at work. I just ended up being completely exhausted by late afternoon. I’m just not packing enough. His solution? Eat more. And eat starchy! Lose the greens at lunch; they’re just taking up valuable real estate in my stomach that I need for energizing carbs.

This past week, I’ve made a few adjustments to my meals, in particular, eating more. Lots more! Yesterday was the big test; I was working 7 a.m. – 7 p.m. with just two 1-hour breaks in between hitting all 3 jobs. I knew it was important to pack a lot and really take into account what Cyrus had to say. And let me tell you, I found a way to just. keep. eating.

[Breakfast]
I’ve tried a couple breakfasts from Cyrus’ plan but this one was my staple. 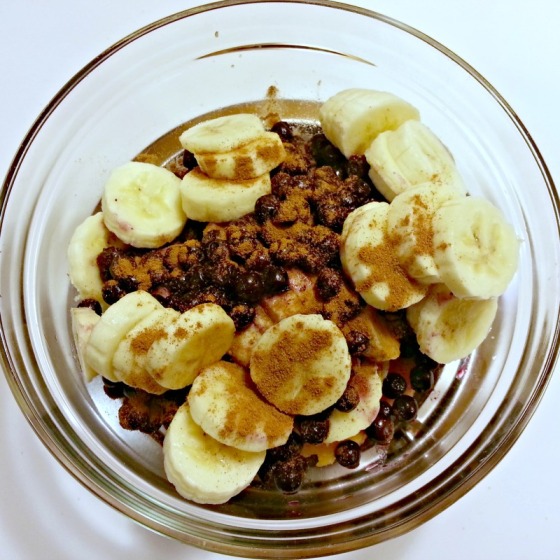 Adding in the protein powder definitely helped keep me full longer. And you’re welcome for snapping a picture pre-chia/protein mix. 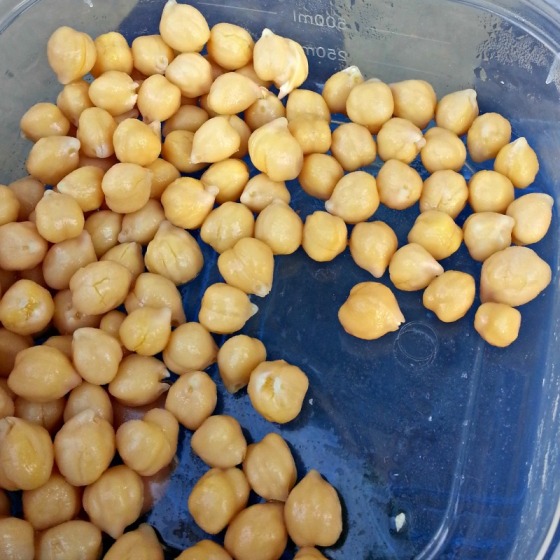 I went to barre after training my first client, but unfortunately could only stay for 30 minutes before heading onto my next job. That said, it was a killer 30 minutes! and I was famished. Chick peas. Because apparently that’s a normal snack? But clearly not enough to hold me over for too long.. Cashew Cookie Larabar to the rescue!

Larabars have been great because they’re just fruit and nuts. No extra sweeteners, grains, etc.

I had a hell of a time staying full. Must have been all of my running around! In between job 2 and 3, I snacked on an apple with 1 tbsp peanut butter. A couple hours later, my very last Gingerbread Larabar made an appearance. And finally, a blood orange. I told you, I was hungry!

A long day required an easy dinner. Same as the night before—mushrooms and lentils with mustard dressing over mixed greens.

[Evening Snack]
I must’ve really worked up an appetite because even after all of that, my stomach was still growling before bed. I reached for a banana.. might as well end the day in a similar fashion to how it started!

Damn. That’s a lot of carbs! Haha they are quite tasty, though, so it’s hard to argue. Just a few days left to finish off my 2 week experiment!

Which meal would be your favorite?
Have you ever considered or tried a high carb diet?

Is it just me or do weekend days go much faster than weekdays? I feel like Monday always sneaks up on me.. 26 years and I’m still not used to it! We had a fun, pretty relaxing weekend that we kicked off with my cousin at the Orioles game. Always fun to be at the park, especially for a win! 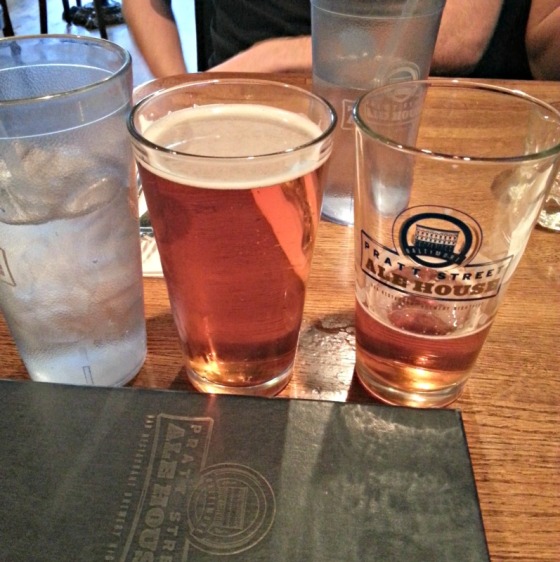 Pregaming for the O’s game! They poured my beer twice so I got a freebie.. hate when that happens! 😉 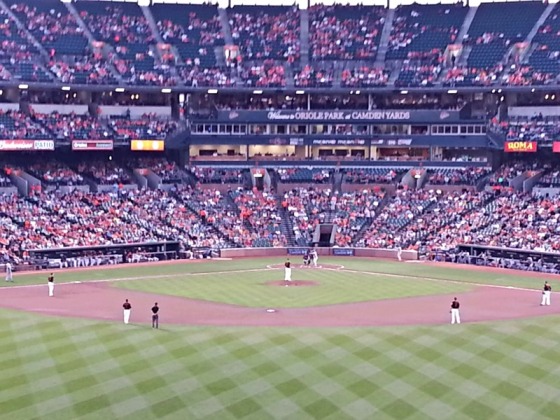 Brian Matusz and Jim Johnson warming up in the bullpen. Fun to be so close to the action! 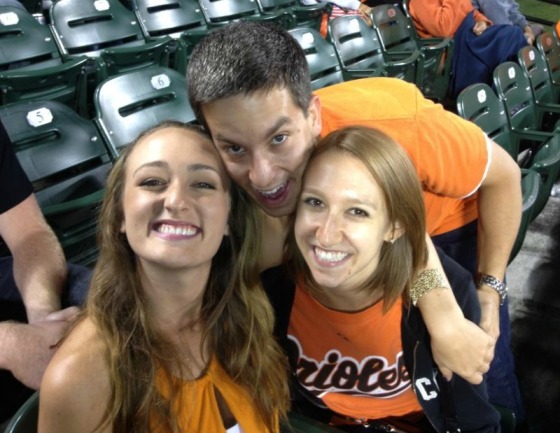 My cousin Nicole, Nathan, and me. We had a terrible time!

Lunch on Saturday. I added mango and avocado to my chick pea tuna salad and it was delicious! I love all of the colors.

Hit up our favorite bar in Baltimore, Max’s, for an evening brew on Saturday. They have a crazy long list and I decided to go for some samples instead of 1 full beer.. I just couldn’t decide!

Hope you had a great weekend too! Back to the daily grind..

Are you a baseball or football fan? Or neither? 😉

Do you prefer to get one large drink or a sampler?

You can always count on a large container of vanilla greek yogurt in my fridge, but after tasting my latest container over and over again, I realized that this was definitely an off batch of vanilla.

It is definitely plain yogurt. Now I’m trying to figure out what to do with all of this plain yogurt! I have to spice it up or sweeten it up or just do something to it! So as we sit here with a fresh rotisserie chicken, I figured chicken salad is the way to go.

Directions
Mix all ingredients together in a medium bowl, except chicken. Taste and adjust any seasonings to your liking. Fold in your shredded chicken. Refrigerate for about 30 minutes to let all of the flavors come together.

Serving Suggestions
I wrapped my chicken salad up in a whole wheat, low carb tortilla with some romaine leaves and 1 100 calorie packet of Wholly Guacamole. This would also be great over mixed greens or as a sandwich instead of a wrap.

You could even do it as a fun appetizer! Get some baked Tostitos scoops and spoon 1 tbsp of chicken salad into each scoop. Sprinkle some chopped green onion and a dusting of chili powder on top and pass around!

What is your favorite way to eat plain greek yogurt? Do you mix it into sweet or savory recipes?

I love summer and of course the deliciously fresh fruits that come along with it!

I’m always looking for ways to spice up my salads and after a nice grocery haul at the farmers’ market last weekend, I had the ingredients to whip up a light and flavorful side dish for dinner. 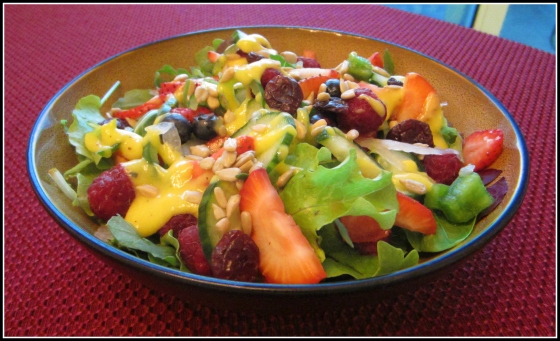 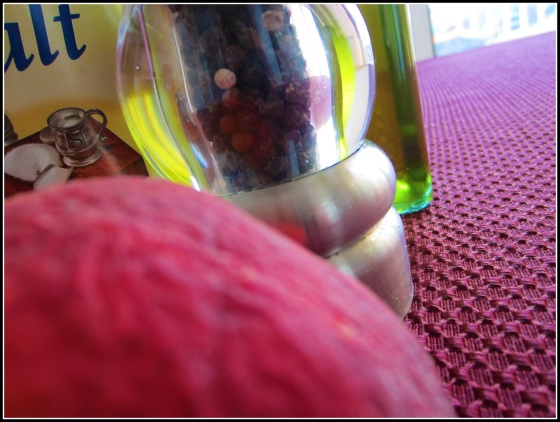 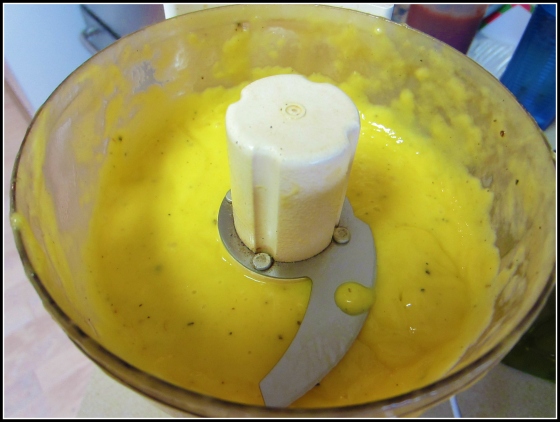 Directions
Slice up the peach and mango. Throw all of your ingredients into a food processor except EVOO. As the processor is running, slowly drizzle the EVOO into the mixture, allowing it to emulsify.

Be sure to taste as you’re adding the honey, salt, and pepper to be sure you get the right sweetness and saltiness that you’re looking for! It’s that easy!

As far as it goes adding fruits and veggies to your salads, I always try to choose the freshest ingredients I can get. This week I was able to find strawberries, blueberries, raspberries, tomato, green pepper, cucumber, vidalia onion, and crisp green onion. The lighter flavors of the vegetables I chose really accent the fresh fruit!

Toss it all together with a fresh spring mix (my favorite!) and top with dried cherries, sunflower seeds, and your delicious Peach Mango dressing.

What are your favorite fruits and veggies of summer?