One thing I love about going out to eat is getting seafood. I rarely cook it at home because Nathan doesn’t eat it so it’s a big treat for me. That said, sometimes I just crave a nice piece of fish at home. That’s where Sizzlefish comes in. A few weeks ago, I was sent a beautiful shipment from Sizzlefish that will surely satisfy all of my seafood dreams! 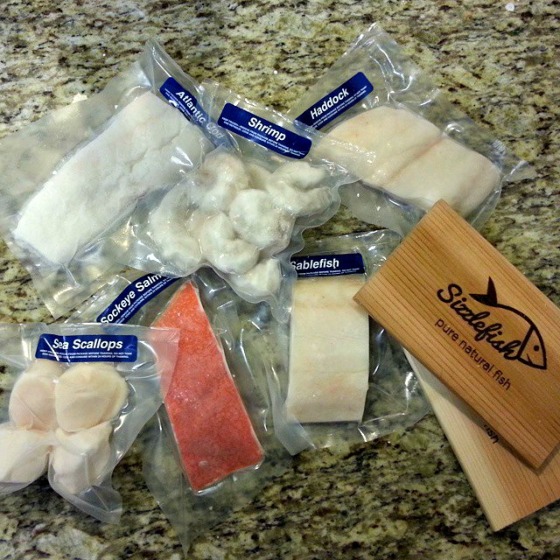 Aside from being downright delicious, fish has so many important health benefits—one of the biggest being the Omega-3s that it provides. Straight from the Sizzlefish website:

Think of Omega-3 fats as Nature’s best performance enhancers. They give cardio-pulmonary and anti-inflammatory benefits to athletes, while actually improving long-term health. They can help you manage weight.

In addition, Omega-3s can provide great benefits to athletes such as muscle recovery and joint health. But enough about the health benefits, let’s get to the cooking!

Serves 2
Adapted from Half Baked Harvest

Directions
Preheat your oven to 425°F. In a small bowl, mix seasonings from cajun through thyme. Place the brussels sprouts on a baking sheet with a drizzle of EVOO and a sprinkling of the seasoning mix and put the baking sheet on the bottom rack of the oven.

In the meantime, heat a large skillet on medium high heat and add 1 tbsp EVOO. Add the pepper and onion to the skillet and saute 5-10 minutes, or until the onions are soft. While that is cooking, coat the haddock filets in the spice mix and place the filets on another lined baking sheet. Place the fish in the oven.

When the veggies are soft, stir in the garlic, and add 1 tbsp soy sauce. Add the diced tomatoes and simmer until almost all the liquid has evaporated. Remove the brussels sprouts from the oven [try not to eat all of them straight from the sheet pan..] and toss them with the rest of the veggies. At this point, the haddock should be fully cooked through; it only takes about 10 minutes! Spoon a scoop of veggies on a plate, place the fish on top, and spoon a little more of the veggies on top.

I served my portion over spiralized beet noodles and Nathan’s [with chicken] over brown rice. It would also be good over pasta, other veggie noodles, or just on its own. Additionally, you could swap out the haddock for another white, flaky fish like Atlantic Cod, Sablefish, Rainbow Trout, or even shrimp!

Have you tried Sizzlefish yet?

I love Friday, don’t you? Weekends are the best and even though I just got back from a relaxing trip home, I’m still looking forward to a relaxing, quiet weekend.

Congrats to Danica for winning my Peanut Butter & Co. giveaway!

Any fun plans over the weekend?