Have you entered my Chobani giveaway?

Asheville, NC is awesome. Nathan and I went down a few years ago for a friend’s wedding and were psyched when my cousin said that’s where she would be getting married. Immediately we started looking up restaurants and breweries that we wanted to try.. turns out there were far too many for the 2 1/2 days that we would be there, but we certainly put a nice dent in ’em!

The wedding was on Sunday so we had planned on leaving Saturday morning around 7 am so we could get there around 3 pm. We wanted to have time to explore and relax. When the groom sent out an email about a brewery tour on Saturday starting at 12 pm, our plans quickly changed. Up a 4 am and out the door by 5? Done.

And so began a weekend of beer.

[Breakfast]
On the go! Friday I made 2 batches of my favorite oats and threw one in the fridge to grab and go for the ride. Best decision ever. I topped it with some nut & seed butters and we hit the road.

[Lunch]
We powered through our drive with just a couple of rest stops and made it to Asheville for lunch! Chai Pani was calling our name; we love Indian food! I got the Tandoori Chicken Salad and Nathan had the Kathi Kabab Roll. The salad itself was pretty good but the chicken stole the show. Nathan’s wrap was full of flavor.. I pretty sure he liked it because I only got one little taste.

[Brewery Tour]
First: Wedge Brewing. I had the flemish style brown ale and it was delicious. Nathan had the witbier and enjoyed it equally as much. We quickly learned that we should be ordering samplers.
Second: Pisgah Brewing. A flight of their finest, of course. Not as good as Wedge, but still quite tasty. The barleywine was my fave!
Third: French Broad Brewing Co. They had a huge selection to choose from! We got another sampler but I forgot to snap a picture of this one. I did, however, get a picture of their Eat Bertha’s Mussels bumper sticker on the wall. BALTIMORE REPRESENT!
Fourth: Highland Brewing. Yet another sampler and a blurry one at that! It may have been a little telling of how I was feeling at this point 😉 Good thing you can’t see it on our faces, right……?

The tour ended at Barley’s Taproom where we met up with the rest of the crowd and everyone had dinner. Nathan and I, however, had other plans for dinner. We do our research 🙂

[Dinner]
We were totally stuffed from all of the drinks [and snacks at Barley’s.. whoops!] but we made our way to The Market Place Restaurant for a very tasty dinner. We split an appetizer not on the menu; an assortment of fresh mushrooms baked with a crispy topper. Delish! I had the ahi tuna appetizer for my dinner and Nathan ordered the parpadelle pasta with braised lamb. Both were extremely tasty, I just wish I was hungrier so I could have ordered a full dinner! 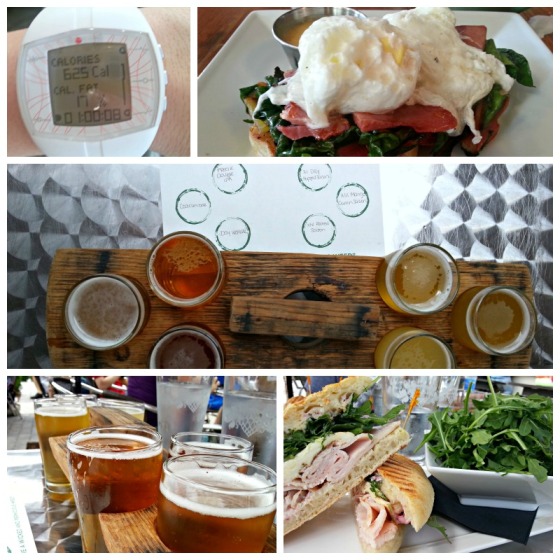 Clearly after the first day, I needed to get in a workout. Luckily the hotel had a gym.. it may have only been one elliptical and one working treadmill, but how many machines does one person need? No drinking till the wedding. Seriously.

[Breakfast]
Eggs Benny. The beauties in the picture actually had to be sent back though.. they were practically hard boiled eggs! No worries, I got a new order and they were awesome! Served over a homemade english muffin, sauteed swiss chard, and country ham.

[Lunch]
Ok, so we lied. We ended up at Wicked Weed Brewing and had to get a sampler. I was most excited for the Coolcumber and for good reason. So good! I had their smoked turkey sandwich with grilled mozzarella, arugula, and cranberry. It was quite tasty and definitely hit the spot.

[Dinner]
Wedding! Like a bad blogger, I didn’t take any pictures, but there was a buffet of chicken, beef, asparagus, salad, and more. Plus cupcakes for dessert! Yum 🙂

Again, I had to hit the gym! We had a big day of traveling ahead of us and I wanted to start off on the right foot.

Before lunch we took a nice drive along Blue Ridge Parkway. It was beautiful and I wish we had more time [and better weather] to hike, but we had to get to work the next day!

[Lunch]
Foothills Brewing. We’re the worst at avoiding beer but I’ll use the excuse that it was either there or McDonalds. I got an awesome portabello wrap with a little hefeweizen on the side. I had to continue the theme of the weekend.

[Dinner]
We made a pit stop in Richmond to meet up with Brittany and her shiny, new husband, Isaac, at one of their favorite restaurants, Mekong. It’s a Vietnamese restaurant that was named the #1 beer bar in America. I ordered the tofu clay pot and started with an Allagash Curieux. The food was great but the beer was better! And Isaac and Nathan were so cute talking about beer 😉

It was so great to see Brittany again and it was fun to catch up on both of our weddings and honeymoons. It’s a shame we don’t live closer!

After a long weekend of great food, great beer, and a great wedding, it was nice to get back into the swing of things. I’m sure this is why we stayed in so much this past weekend.. no complaints here though!

When you’re traveling, do you go out of your way to find the best restaurants or bars?