I’ve got a fun one for you today. Danica did this survey on her blog yesterday and tagged me to do it, too. So let’s get to it, shall we?

Four names that people call me, other than my real name:

Four jobs I have had:

Four books I’d recommend:
Eesh.. this is a tough one for me. I’m not a big book-reader, so I’m going to change this to blogs.

Four places I have lived:
Similar to Danica.. I haven’t gotten around too much!

Four places I have been:

Four of my favorite foods:

Oh, and ice cream since we moved to a place with the most ridiculous flavors around.

Four TV shows that I watch:

Four things I am looking forward to this year:

I mentioned the other day that I took an extra rest day this week because my legs were dying. That said, since I knew I’d be sitting on my butt all day in front of the computer, I wanted to do some arms and abs throughout the day so I decided that every hour I’d find a quick something to run through. I used to do this with my coworkers at my last job and it really makes the day fly by! Below are some of my favorites that I found. If it’s a circuit workout, I went through only once and kept everything under 5 minutes. And easy on my legs!

Sunkissed Abs – Tone It Up

Plank with Puma – Cait Plus Ate 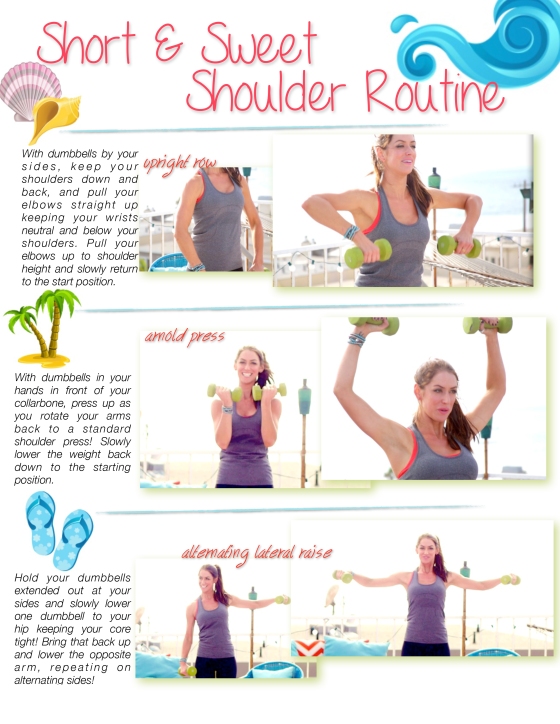 Itty Bitty Bikini – Tone It Up

Obviously I kept myself busy and it was a nice way to have breaks throughout the day. So get off your butt at work and get moving 🙂

Do you do any exercises throughout the day to stay moving?
What is your favorite ab or arm workout?

Have you entered my Peanut Butter & Co. giveaway yet?

Well this was another relaxing and fun weekend! Friday night I met up with Kara for a drink at Prizefighter. I hadn’t been yet but heard that they were known for their cocktails. Since it was rainy, I was feeling something nice and warming and opted for the Nuevo Viejo.

I could use some help on my cropping skills.

We met up with Nathan at Summer Summer for some delicious Thai food for dinner. And lucky for us, they had a good amount of options on the happy hour menu.. cheap date 😉

Saturday was pretty laid back. It’s been raining constantly since Thursday so that doesn’t really make for fun times outside. We went out again for dinner to get out of the house and revisited The Bureau 510. I got the Mother Nature sandwich that I was eying the first time and it was great. 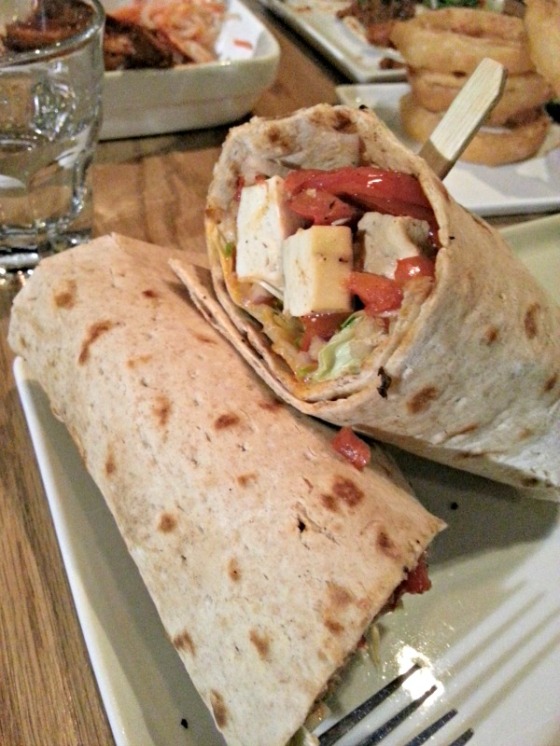 I also got an awesome package from Caitlin and immediately had to dig into my goodies! 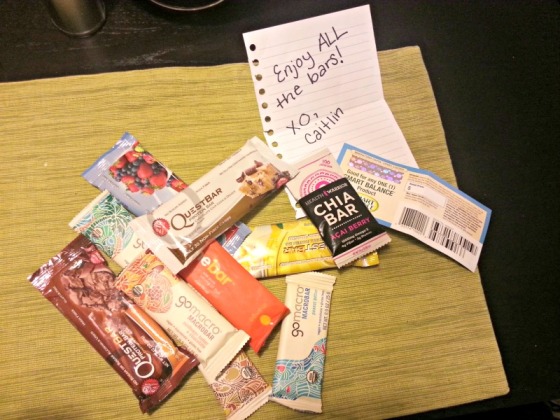 Yesterday I braved the rain and met up with Melissa, another Tone It Up-per, for the Park Chalet Beer 5K. Being sick all week, I considered skipping out because running in the rain may not be the best idea, but I was feeling much better so I decided to give it a go and I’m so glad I did! 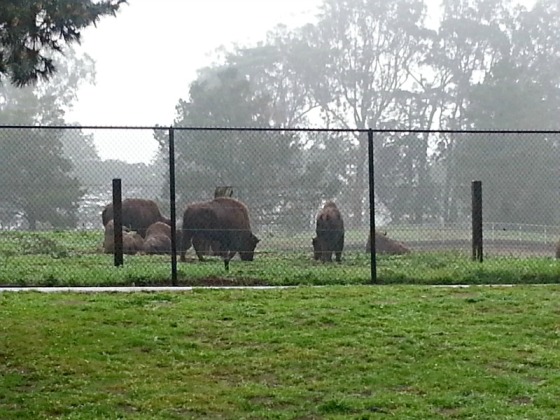 We met some friends along the way

I’m usually not one for enjoying the rain, but there was actually something nice about it. Maybe because I was actually treating this as the fun-run that it was so I was just taking it all in. But that definitely deserved a brewski [or 2] afterward! 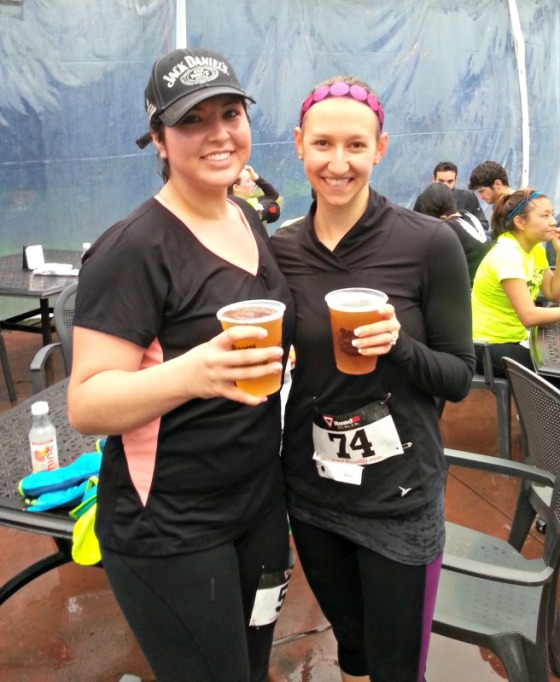 Cheers to finishing the run!

Those beers really did me in and I was happy to get home and into warm, dry clothes. Nathan took the reigns on dinner and roasted a beautiful bird! I added some roasted asparagus and naan on the side and heated up some korma sauce. Indian in a snap 😉

He knows his way around a bird!

We also have a new addition to the kitchen.. now we just have to hang it!

I could use some help with my chalkboard handwriting!

Have you ever done a race or fun run in the rain?
What’s on the menu at your house?

Remember I mentioned recapping my crazy New Years Eve? I guess you could say it was crazy in its own right..

We had never really gone out for NYE, it was always spent with my family for dinner and then with friends afterward to watch the ball drop. Since we’re still newbies around here, we decided to give the whole crazy night out a go! Boot & Shoe Service, a restaurant that is known for their pizza, was having a cassoulet dinner followed by a dance party with live music at their sister restaurant, Penrose, across the street. Sounds like a good time, right? Sold!

Dinner was fabulous but unfortunately the lighting was not so I decided to spare you and show smaller pictures. You’re welcome 😉 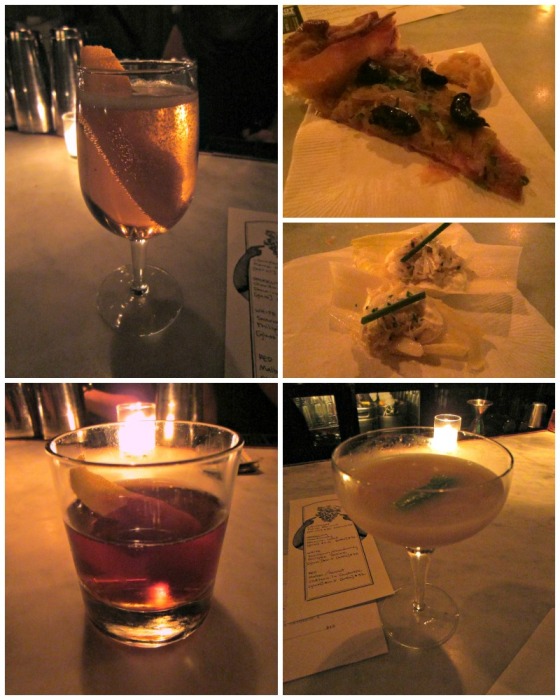 Dinner came with a drink ticket for the “josephine baker”—spumante, bonal, & cane sugar. It’s not the drink that I would have chosen from the list but it was fabulous! The sparkling wine cocktail was a nice, light way to start the night. Not long after we arrived, they began passing the hor d’oeuvres. The gougère—mini cheese pastries—were warm and light.. perfect for popping! The caramelized onion tart was loaded with flavor and really, you can’t go wrong with caramelized onion and a crunchy crust.

By this time, we were ready for a couple more cocktails. I went for the “elevator to the gallows” [Caitlin would be proud!]—islay scotch, housemade french prune brandy, & génépi—and Nathan chose “the upright”—amaro montenegro, cocchi rosa, suze, & lemon. After he took one sip of my drink, I agreed to share. What can I say? I’m good at choosing cocktails! I grabbed a couple of dungeness crab bites on endive with creme fraiche and an oyster on the half shell; these were my least favorite of the hor d’oeuvres.. I really enjoyed the warm bites more and I’m not a big fan of creme fraiche. I suffered through it to get the crab though!

After cocktail hour, we were seated at a long family-style table where we shared a charcuterie plate with the couple next to us. I was already being “that girl” taking pictures of everything so I thought I’d spare Nathan and not take a picture of the shared plate too! Included on the plate was duck liver pate, rabbit terrine [the best!], whole grain mustard, mini gherkins, pickled carrots, and crostini. We’ve grown to really love terrine so we definitely enjoyed this starter.

Next up was the frisee salad with marinated beets and perigord truffles. It was lightly dressed and topped with crunchy garlic chips which really pulled everything together. Unfortunately, the truffle didn’t really add anything to the dish but I loved it anyway and ended up eating most of Nathan’s beets too! The star of the meal, the cassoulet, was served next. Nathan and I shared the big ceramic pot filled with pork belly, duck, and white beans, and you bet we polished it off! It was a hearty dish and the meat fell right off the bone. There were also plenty of crispy bits which added a nice crunchy texture to the stew.

We finished off our meal with vol au vent with poached pears. We were both so full but it was too good to waste! Not too sweet and the layer of homemade whipped cream under the pears gave the dessert a nice balance. And as if that wasn’t enough, they also brought us stuffed figs. I’m not sure what they were stuffed with, but I could have eaten 100 of them!

After we rolled ourselves out of the restaurant around 11:15, we decided we were perfectly happy to head back to the hotel [yes, we’re old] and have a quiet end to the night watching the ball drop.. in New York. So bizarre that they just replayed the ball dropping in Times Square! But hey, I guess no one else does it quite like they do in New York!

We’re looking forward to getting settled in California and having lots of friends and family come visit!

The other day, Nathan showed me this amazing gif. I was absolutely cracking up at how spot on it is.. and I’m totally guilty! Then Caitlin [who wrote her own Insta-Cait post today] sent me this post and I immediately knew I had to do an instagram blogger cliche post of my own.

Check out my awesome salad!

[Full disclosure: I even swapped this picture out a few times before settling on my favorite.]

Is there a more cliche dessert than froyo?

A double whammie! The selfie and watch all in one!

BOOM! And there’s the watch again..

Of the adult variety. PB&J in a glass.. I kid you not.

No, but really.. Brittany is awesome! 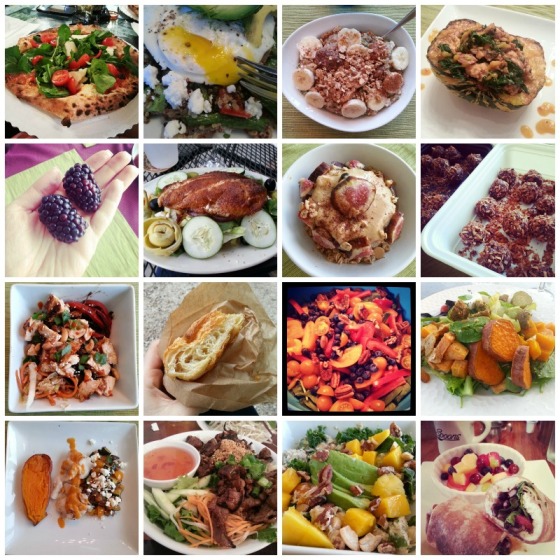 Maybe I’m out of control.. or maybe it all looks delicious. Now excuse me while I go take a picture of what I’m eating. Because you all need to know!

Which cliche do you fall into?

Did I miss any important cliches?