How is it that the weekends fly by so darn quickly? I can’t believe it’s already Monday, we’re already half way through January, and we’re going to be moving in less than 2 weeks! I guess we should have gotten a ton of boxes packed over the weekend, but that wasn’t quite the case. Instead, we worked on finishing up some things in the fridge and pantry.. 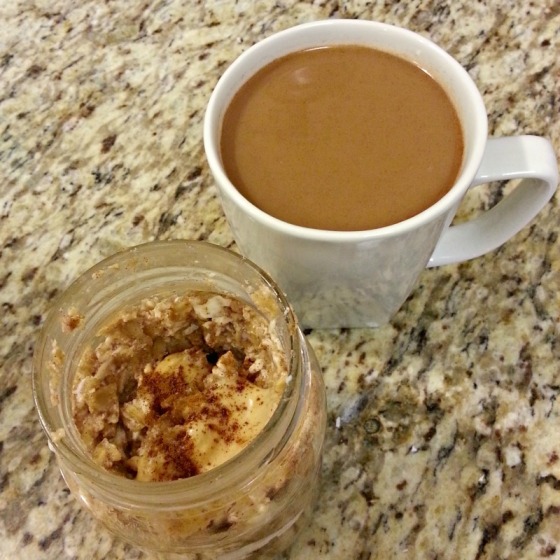 It’s always bittersweet to finish a jar of nut butter. Can’t complain about the oats in a jar, though.

I made a few substitutions to the bars based on what I had in the pantry. I subbed peanut flour for the tigernut flour, goji berries for the cranberries, White Chocolate Wonderful Peanut Butter & Co. for the coconut butter, and I added an egg and the xylitol. They turned out wonderfully and I might have had one as an appetizer to dinner… 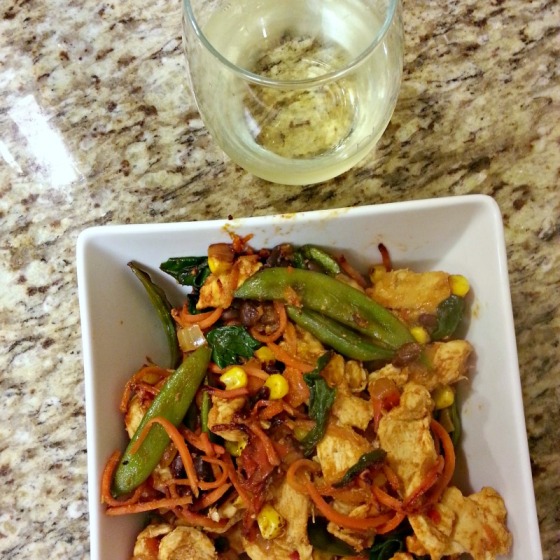 Leftover citrus chicken with all the veggies in the fridge!

… a dinner that was to use up whatever we could from the fridge.

Yesterday I decided to suck it up and go for a run. I had a discussion with Nathan last week about how I’ve recently been frustrated with my body; if I want to see the changes I’m looking for, I need to make changes in my routine. So a 5K, I ran.

The fuzziness represents how I felt afterward. Ha!

Some people run a 5K in their sleep; heck, I used to! But since I’ve cut back, not only on my running, but also my cardio, a 5K isn’t as easy as it used to be. I’m determined to get it back though.

And this was just plate #1…

We treated ourselves to a Mexican buffet right down the street from our apartment and it was SO good! They had 8 different kinds of chicken mole, pork carnitas, pork belly, and tons of veggies. We definitely ate too much [hence last night’s dinner..] but at least we stuck to mostly veggies and meat, yes? I can’t believe it took us so long to go!

This week is going to be a doozy but we’re gonna get through. And I’m definitely looking forward to dinners..

Did you do anything exciting over the weekend?

2 thoughts on “Pumpkin Bars, Oats in a Jar, and a Mexican Buffet”